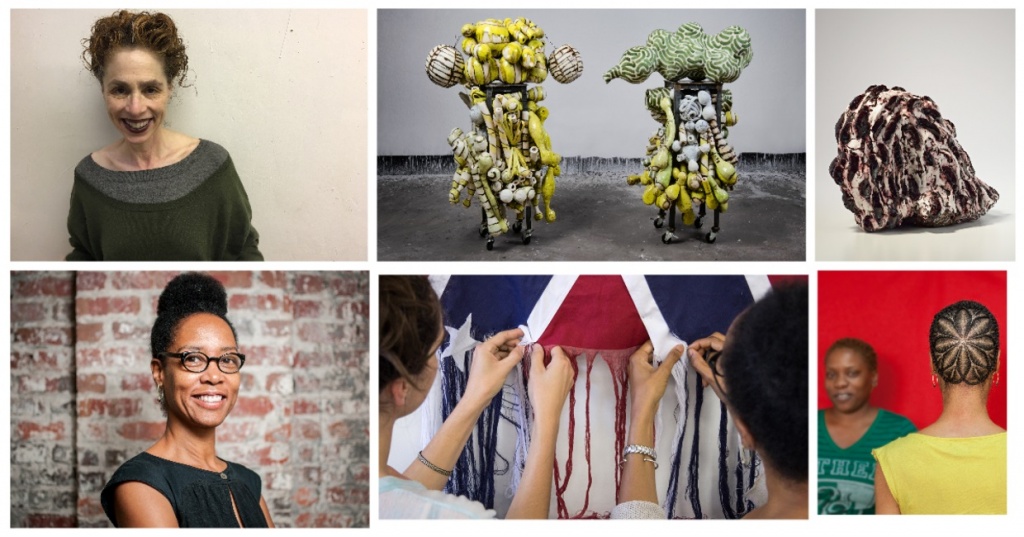 Congratulations to Academy alumni Annabeth Rosen (Ceramics ’81) and Sonya Clark (Fiber ’95), who were named to the 2020 American Craft Council College of Fellows.

To be elected to the College of Fellows, an artist must demonstrate leadership in the field, outstanding ability as an artist or teacher, and 25 years or more of professional achievement as an American craftsperson. According to the American Craft Council, “Awardees are nominated by the active College of Fellows; the distinction represents recognition of meaningful contribution to the field not by critics, scholars, or collectors, but by one’s peers. It has become appropriately cherished by its recipients, who on joining the ranks of the College are required only to continue its legacy of nomination and recognition of the successive generations of craftspeople.” This is the 50th year that the American Craft Council has issued the awards.

Annabeth Rosen
Annabeth Rosen recently received a Distinguished Alumni Award from Cranbrook in 2019 in conjunction with her exhibition Annabeth Rosen: Fired, Broken, Gathered, Heaped that was on view at Cranbrook Art Museum from Nov. 17 through March 10, 2019.

Rosen is a critically acclaimed pioneer in the field of ceramics. She says, “my process of building, breaking, and putting back together becomes part of an interior process as well as a means of fabrication.” For more than two decades, Rosen has consistently expanded her practice to encompass installations that meld materiality and process. Her works, whether diminutive or monumental, are composed through laborious additive processes that push the medium beyond spectacle and into dialogues about endurance, labor, and feminist thought, as well as nature, destruction, and regeneration.

Rosen is the Robert Arneson Endowed Chair at the University of California Davis (UC Davis), a position she has held since 1997. Her work is represented by P.P.O.W Gallery in New York and the Anglim Gilbert Gallery in San Francisco. Rosen’s work is in the collection of The Boston Museum of Fine Art, The Oakland Museum, The Denver Art Museum, The Philadelphia Museum of Art, and many public and private collections. She has received multiple grants and awards, a Pew Fellowship, two National Endowment for the Arts Fellowships, a UC Davis Chancellors Fellowship, a Joan Mitchell Painters and Sculptors Award, and in 2016 was named a USA Artist Fellow. Most recently, Rosen has been granted the Gwendolyn Knight Lawrence Award from the American Academy of Arts and Letters, and a Guggenheim Fellowship.

Sonya Clark
Sonya Clark is a textile artist who makes installations, performances, and sculptures that employ materials and objects like combs, beads, flags, and human hair to celebrate Blackness, interrogate the roots of injustice, and address historical imbalances. She says, “Objects have personal and cultural meaning because they absorb our stories and reflect our humanity back to us. My stories, your stories, our stories are held in the object.”

Clark received Cranbrook Academy of Art’s first Alumni Achievement Award in 2011, which celebrates alumni who have achieved excellence early in their career.

She has created works highlighting notable African American figures, including entrepreneur and activist Madam C.J. Walker and former President Barack Obama. Her fiber art has also extended into the craft of hairdressing, which has been called “something generative that deserves consideration in the realm of the art object, and that touches intimately on race and cultural worth.”

Clark is Professor of Art at Amherst College in Amherst, Massachusetts. Previously, she was a Distinguished Research Fellow in the School of the Arts and Commonwealth Professor at Virginia Commonwealth University where she served as chair of the Craft/Material Studies Department from 2006 until 2017. In 2016, she was awarded a university-wide VCU Distinguished Scholars Award.

Her work has been exhibited in over 350 museums and galleries in the Americas, Africa, Asia, Europe, and Australia. She is the recipient of a United States Artists Fellowship, a Pollock Krasner award, an 1858 Prize, an Art Prize Grand Jurors Award, and an Anonymous Was a Woman Award. She has held residencies at the Red Gate Residency in China, the BAU Carmago Residency in France, the Rockefeller Foundation Bellagio Residency in Italy, the Smithsonian Artist Research Fellowship in DC, the Knight Foundation Residency at the McColl in North Carolina, the Civitella Ranieri Residency in Italy, the Yaddo Residency in NY, and the VCUarts Affiliate Fellowship at the American Academy in Rome. Most recently, she was an inaugural recipient of the Black Rock Senegal Residency Fellowship.

Both Rosen and Clark will be honored during a formal ceremony on Saturday, Oct. 24, 2020, at the Baltimore Museum of Art. For more information about the awards, visit the American Craft Council website.