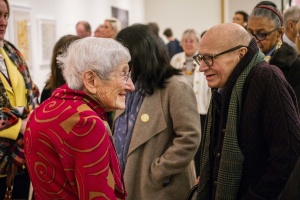 Glen Michaels talks with Ruth Adler Schnee at the opening of her exhibition Ruth Adler Schnee: Modern Designs for Living at Cranbrook Art Museum in December of 2019. Photo by Sarah Blanchette.

This weekend, we were saddened to learn of the passing of H. Glen Michaels (Painting ’58). Glen was an alumnus of the Academy and a longtime supporter of the arts, especially in Metro Detroit, where he settled after graduating from Cranbrook.

Michaels is featured in the upcoming book, With Eyes Opened: Cranbrook Academy of Art Since 1932 (available in 2021) and will have work featured in the accompanying exhibition opening at Cranbrook Art Museum in June 2021. Below is an excerpt from the book, written by Eva Caston.

“Glen Michaels was initially inclined towards a career in music. He played piano for vaudeville shows and won a scholarship to the Yale School of Music in 1950. There he drew caricatures for the school newspaper, painted portraits, and published a book of cartoons entitled Oh, You’re a Musician, which caught the attention of New Yorker cartoonists Mary Petty and Alan Dunn. He went on to receive his BA in arts education from Eastern Washington University in 1957. His teacher at Eastern Washington, Opal Fleckenstein, and Frank Okada, an alumnus of Cranbrook Academy of Art, would encourage him to pursue graduate studies at Cranbrook.

Cranbrook proved to be a formative environment for Michaels. He arrived as a painter, but soon his fascination with tiles, found objects, and sculpture engendered an aesthetic that exploited the gap between two-dimensional and three-dimensional work. After he graduated, Michaels was hired as a teacher for the Young People’s Art Program, a partnership between the Junior League of Birmingham, Michigan, and Cranbrook Art Museum. He was a leader in the program from 1958 until 1965 and saw it as one of the first initiatives by Cranbrook to be more involved with the local community.

Michaels’ work can be seen in many private and public collections in the Metro Detroit area and beyond. His public commissions include the Detroit People Mover system; the NASA Goddard Space Flight Center; and Ford Motor Company’s pavilion at the 1964 New York World’s Fair.”