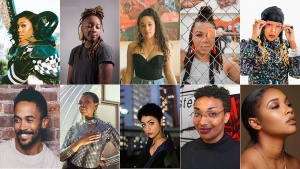 McArthur Binion’s (Painting ’73) surge of success in recent years led him to create the McArthur Binion Foundation, with a goal to support young, under-represented artists of color living in Detroit, his hometown.

Due to the pandemic, MAB Foundation’s 2020 Writing Residency was post-postponed, but they were able to launch another new project, the Pay-It-Forward Campaign. In September, five Detroit-based artists were awarded unrestricted grants of $1,500 each the ability to select another artist in the Detroit community to receive an additional $1,500. Grantees include Tiff Massey (Metalsmithing ’11) and Laura D. Gibson (Photography ’20).

Starting next summer, two artists will each receive a $10,000 grant and use of an apartment for up to three months in a renovated church rectory just east of downtown Detroit.

Read the full article from The Art Newspaper here.