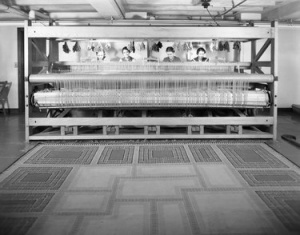 Loja Saarinen, wife of Eliel Saarinen and mother of Eero Saarinen, also had an integral part in the early years of the Cranbrook community’s development. George G Booth originally planned for textiles to be designed at Cranbrook, but produced in Finland, but it was Loja’s suggestion to house a weaving studio on the Academy campus. She became the head of the Department of Weaving and Textile Design at Cranbrook Academy of Art and also ran Studio Loja Saarinen.

Studio Loja Saarinen was a commercial studio, working in traditional and modern Swedish methods, and created works for both Cranbrook and clients across the country. At its height, the studio housed 35 looms, one being a 12-foot loom where four or five weavers would work on the largest pieces.

Loja was the force behind the development of Craft programs at Cranbrook and paved the way for future female instructors. In the mid-1940s she retired and Marianne Strengell would take over the weaving department at the same time as Maija Grotell was hired to head the Ceramics department.

Click here to read the full article from Hunker.