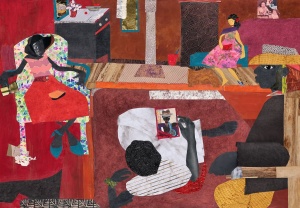 The print archive of Stewart & Stewart, a printer and publisher of fine art prints founded by Norman Stewart (Printmaking ’77) and his wife Susan Stewart, has been acquired by the Detroit Institute of Arts (DIA) for the museum’s permanent collection. The Stewart & Stewart Archive at the DIA will now total more than two hundred prints by thirty-four artists. The collection includes a number of Cranbrook alumni and connections including Keiko Hara (Printmaking ’76); former Artist-in-Residence and head of the Printmaking Department, Connor Everts; and John Glick (Ceramics ’62). The Stewart & Stewart Archive prints will be viewable online on the DIA website and by appointment in the Ina M. Clark Study Room at the DIA.

A former Teaching Assistant at Cranbrook Academy of Art, Norman Stewart designed and built the Academy’s first comprehensive screenprint facility in the Printmaking Department (now the Print Media Department) under the direction of Irwin Hollander and then Connor Everts. Susan Stewart taught visual arts at Cranbrook’s Brookside School in the 1990s.