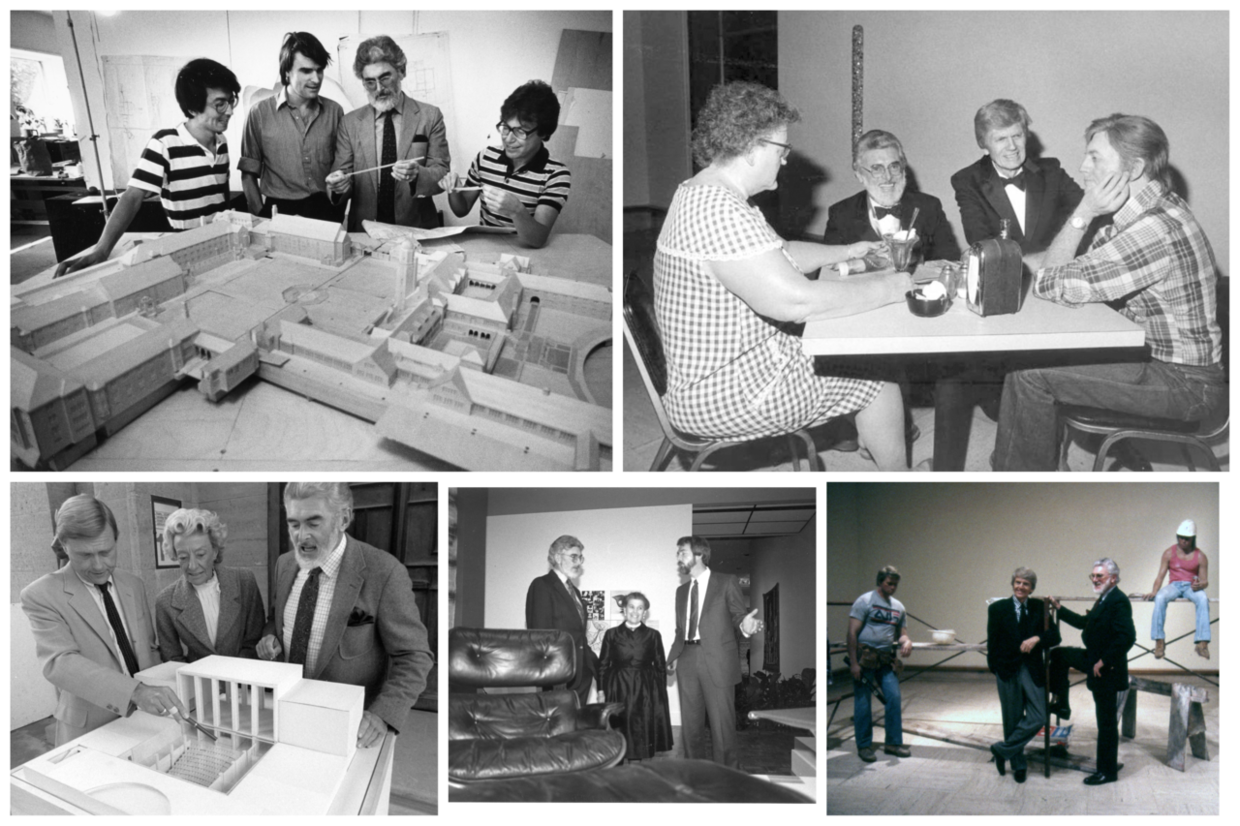 Cranbrook Educational Community mourns the passing of Roy Slade, who served as President of Cranbrook Academy of Art and Director of Cranbrook Art Museum from 1977 to 1994. A larger-than-life figure, Slade presided over many important changes at both the Academy and Art Museum during his influential tenure.Born in 1933 in Wales, Slade earned his degrees in Painting and Education from Cardiff College of Art and the University of Wales. He taught in the U.K. and was at Leads College of Art before coming to the United States in 1967 as a Visiting Professor in Painting at the Corcoran School of Art in Washington, D.C. Slade was appointed Dean of Corcoran in 1970 and Director of the Corcoran Gallery in 1972  before coming to Cranbrook in 1977.Cranbrook Art Museum Director Andrew Satake Blauvelt, a 1986 graduate of the Design department and author of the recent book With Eyes Opened, a history of Cranbrook Academy of Art, said, “In a prophetic speech to the Board of Trustees in April 1977, prior to even starting his new position, Slade shared his vision for the Art Museum, outlining ideas that would become our core mission: (1) an installation showing the history and development of Cranbrook Educational Community, (2) a collection of works by faculty and alumni … reflecting the very best tradition of Cranbrook Academy of Art, and (3) traveling shows and exhibitions originated by Cranbrook … showing the best of contemporary art and design. All of these would come to pass during Roy’s tenure, as well as other important achievements, such as the restoration of his residence at Cranbrook, Saarinen House – now part of the museum’s collection.An artist himself, Slade would bring to Cranbrook Art Museum many prominent artists and exhibitions, such as fellow Washingtonian Sam Gilliam, Keith Haring, and Yoko Ono, among many others. He gathered works for the collection from important alumni of the Academy including Toshiko Takaezu and Duane Hanson. The Art Museum would also showcase significant local collections such as Gilbert and Lila Silverman’s Fluxus holdings well before other museums.”Cranbrook Educational Community President Aimeclarie Roche remarks, “Roy will perhaps be best remembered for his deep appreciation of the cultural legacy of Cranbrook, championing the seminal exhibition and publication, Design in America: The Cranbrook Vision, 1925-1950, organized by the Detroit Institute of Arts and the Metropolitan Museum of Art in the 1980s, which traveled the United States and beyond.”Current Maxine and Stuart Frankel Director of Cranbrook Academy of Art Paul Sacaridiz notes, “The impact that Roy Slade had on Cranbrook cannot be overstated, and he played a key role in elevating the national and international reputation of the Academy. His leadership has left a lasting legacy and helped shape the larger field of graduate education in Art, Architecture, and Design.”Roy had a profound impact on the Academy and did much to burnish the Academy’s national and international reputation. He recruited Artists- and Architects-in-Residence such as Jun Kaneko, Graham Marks, Dan Hoffman, Daniel Libeskind, Gary Griffin, Bev Fishman, and Heather McGill as well as encouraging a robust roster of visiting artists at Cranbrook. By the time Slade left the Academy in 1994, it was ranked among the very elite of graduate programs nationally and remains a top-ranked program today.Slade remained a practicing artist and passionate advocate of the arts throughout his career, using his 40 years of experience as a painter, arts administrator, and educator to deliver lectures around the world, focusing on contemporary art and art museums. He served as a curator or juror for more than 100 exhibitions, including the work of artists from Ansel Adams to Louise Nevelson.His many catalogs include The Corcoran and Washington Art, Yoko Ono: The Bronze Age, Modern Argentine Drawings, and Niels Diffrient: Knoll Seating.His own paintings were exhibited in solo and group exhibitions at art galleries and museums around the world and his work is included in many private and public collections in the U.K. and United States.He was actively involved in the National Endowment for the Arts (NEA), National Council of Arts Administrators (NCAA), National Association of Schools of Art and Design (NASAD), and the Association of Art Museum Directors (AAMD).Among his awards were Knight First Class, Order of the White Rose of Finland; The Royal Order of the Polar Star of Sweden; Honorary Doctorate of Arts, Art Institute of Southern California; Founders Medal, Cranbrook Foundation; and Honorary Member of AAMD.Always an adventurer, upon his retirement in 1994, he and his wife Agnes drove across the country on three different occasions. Then, over the span of six years, they cruised their 40’ boat from the Great Lakes to the Intercoastal and the Bahamas, eventually dropping anchor in Clearwater, Florida. The family spent their summers on Shelter Island where they would gather to celebrate the fourth of July and Roy’s birthday on July 14.Roy was preceded in death by his wife Agnes. He will be remembered by his children Charles and John Fleckenstein and Anne Benge, and his beloved grandchildren, Olivia, Catherine, Charles, Clara, and Julian.The most recent tribute to Slade’s career at Cranbrook occurred in 2018, when the Cranbrook Center for Collections and Research presented the exhibition Saarinen House: Presidents/Residents, 1946 – 1994. Originally staged in the spaces in which Slade once lived, Saarinen House, the exhibition now lives as an online exhibition. The Center’s Director, Gregory Wittkopp, and the Academy’s Director of Academic Program and Library, Judy Dyki, are among Cranbrook’s current staff that Slade hired at the beginning of their own careers at Cranbrook and who continue to remember him as an important mentor and friend.