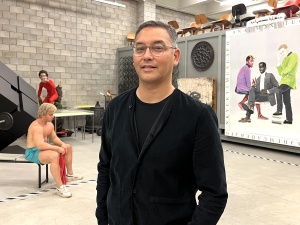 Bloomfield Hills, Mich., June 15, 2022 – Cranbrook Academy of Art and Cranbrook Art Museum are pleased to announce that Andrew Satake Blauvelt (Design ’88) has been awarded an AIGA Medal, the most distinguished honor in the profession of communication design.The award is presented annually by AIGA, the professional association for design. It is given to those who are recognized for “exceptional achievement to the advancement of the field of design as a respected craft, strategic advantage, and vital cultural force.”Blauvelt is being recognized for his work in the field of art and design in service of the public as a steward of design history. According to AIGA, “he has redefined the traditional role of the museum in the community and made innovative cultural and educational programming accessible to all.”AIGA began issuing the award in 1920, with several Cranbrook Academy of Art alumni receiving the high honor over the years. Past recipients include 2017: Nancy Skolos and Tom Wedell (Skolos: BFA Design ’77) (Wedell: Photography ’77); 2016: Gere Kavanaugh (Design ’52); 2013: Lucille Tenazas (Design ’81); 2010: Steve Frykholm (Design ’69); 2007: Edward Fella (Design ’87); 2006: Lorraine Wild (Design ’82); 2005: Meredith Davis (Design ’75); 2000: P. Scott Makela and Laurie Haycock Makela both (Design ’91); 1999: Katherine McCoy (Co-chair Design Department ‘71–‘95); 1977: Charles and Ray Eames Charles: Student, Architecture, 1938–1939, CAA Instructor of Design, 1939–1941, Ray: Student, 1940–1941.“For years, Cranbrook has benefited from Andrew’s keen insights and innovative approaches to engaging the minds, hearts and souls of artists and visitors alike as they walk through the doors of the Art Museum. We are thrilled that he is also receiving this recognition from the top voices in the industry,” said Aimeclaire Roche, President of Cranbrook Educational Community. “We look forward to celebrating his achievements and continuing to support his groundbreaking initiatives.”Other recipients of the AIGA Medal this year include Emily Oberman and Louise Sandhaus.Blauvelt has served as Director of Cranbrook Art Museum since 2015, leading the institution’s transformation into a vibrant and diverse cultural destination and community partner.Educated as a graphic designer, Blauvelt expanded his practice to include authoring historical research; curating major exhibitions on art, architecture, and design; editorial design work for both print and online publishing; conceiving and managing strategic design initiatives; and writing theory and criticism about the field.Prior to Cranbrook, Blauvelt served in a variety of curatorial and administrative roles at the Walker Art Center in Minneapolis for 17 years, providing curatorial direction to that organization’s design programming and, as Design Director, creative leadership of its award-winning design studio and progressive brand identity. In 2009, the Walker was the recipient of a National Design Award for Institutional and Corporate Achievement, the first museum and non-profit organization to receive the honor, previously bestowed on such companies as Target, Nike, and Apple.Blauvelt has been a consistently strong voice in the field of graphic design. He has written for publications such as Eye and Emigre magazines and tackled a variety of topics including the cultural impact of graphic design and the social representation of designers and audiences. His guest-editorship of the three-volume series, “New Perspectives: Critical Histories of Graphic Design,” for the journal Visible Language sought new theoretical frameworks to understand the history of the field. As an educator in the early 1990s, he also helped create one of the first graduate programs of graphic design to focus on issues of race, class, gender, and sexuality and their intersections at North Carolina State University’s College of Design. He was named Educator of the Year by the Graphic Design Education Association.As a curator, Blauvelt has organized several major exhibitions and accompanying publications. With Eyes Opened: Cranbrook Academy of Art Since 1932 (2021) was the largest exhibition and publication of the utopian art school and involved six years of research to create a more inclusive and diverse history of the school, resurfacing the work of many women, artists of color, and persons identifying as LGBTQIA+. Hippie Modernism: The Struggle for Utopia, 1964-1974 (2015) was a pioneering research project resulting in an influential and critical reexamination of the counterculture period in the United States and its many innovations in the realms of art, architecture, and design. He co-curated with Ellen Lupton and a team of guest curators the exhibition and publication, Graphic Design: Now in Production (2011), which surveyed the millennial transformations of the field in the wake of the authorship debates of the 1980s and 1990s.A practicing communications designer for more than 30 years, Blauvelt’s work has been widely exhibited and published in the United States, Europe, and Asia. He is a Fellow of AIGA Minnesota and an elected member of Alliance Graphique Internationale (AGI). He received his MFA in Design from Cranbrook Academy of Art and his Bachelor of Fine Arts in Visual Communication and Photography from the Herron School of Art, Indianapolis.Blauvelt will be presented with the award at a ceremony during the AIGA Design Conference, taking place in Seattle, Washington, October 20–22, 2022. For more information, visit AIGA.org. Find a full list of Academy alumni award winners on our website.