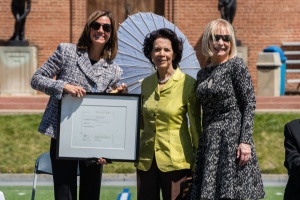 Bloomfield Hills, Mich., May 25, 2021 — Cranbrook Academy of Art and Art Museum, along with their Board of Governors, are pleased to announce that an honorary Master of Fine Arts degree was conferred upon Artis Lane during the Academy’s May 14 commencement ceremony.

Lane is believed to be the first Black woman to enroll at Cranbrook Academy of Art, studying at the Academy in 1951.

She was born in 1927 in North Buxton, Ontario, a settlement established by former slaves from the United States heading north to Canada via the Underground Railroad. She attended the Ontario College of Art on scholarship before enrolling in the Painting Department at Cranbrook at the behest of the Urban League.

After a year of study, Lane went on to a long and successful career that spans more than seven decades and encompasses a wide range of media and themes, including painted and sculpted portraits, boldly colored figurative paintings, and large-scale bronze sculptures.

Lane was a resident of Los Angeles for more than 30 years, but she lived and worked in Detroit in her early career, where she once again resides. Gaining early prominence for her compelling portrait work, this aspect of Lane’s practice has included many dignitaries, such as Jacqueline Kennedy Onassis, Nelson Mandela, Oprah Winfrey, and Presidents Ronald Reagan and Barack Obama, and First Lady Michelle Obama. In January of 2021, President Biden chose Lane’s bronze bust of her friend Rosa Parks in the collection of the Smithsonian National Portrait Gallery for his Oval Office. Her bust of abolitionist and suffragette Sojourner Truth can be found in Emancipation Hall and is the first sculpture to honor an African-American woman in the United States Capitol.

While known for her depictions of historical figures, particularly those involved in social justice movements, Lane’s sculptural practice also explores the metaphysical conditions of humanity.

In 2007, the California African American Museum staged a retrospective of nearly 100 of Lane’s pieces and bestowed a lifetime achievement award honoring the artist.

This is only the second time in the Academy’s history that it has conferred an honorary degree, the first was to longtime supporter and former Academy and Art Museum Board Chair Maxine Frankel in 2015.

Lane’s work will be included in the upcoming exhibition With Eyes Opened: Cranbrook Academy of Art Since 1932, which opens to the public at Cranbrook Art Museum on June 20, 2021. She is also featured in the companion publication.

“Throughout her prolific career, Artis Lane has shown a keen understanding of the human condition, which is why her work is so powerful. She sees beyond her subject’s likeness, capturing their spiritual awareness,” says Susan R. Ewing, the Maxine and Stuart Frankel Director of Cranbrook Academy of Art. “As we work to bring the underrepresented voices of the Academy to the forefront through projects such as Cranbrook Art Museum’s upcoming exhibition With Eyes Opened: Cranbrook Academy of Art Since 1932, we must find other ways to recognize the important figures who have come through our studios over the course of nearly 90 years. We are proud to celebrate her connection to Cranbrook.”

Artis Lane had this to say to the Class of 2021 graduates as she received her degree, “An artist’s life can go on for as long as you have the inspiration to pursue it. My sincere hope for all of you is that your careers will be as long and satisfying as my own continues to be.”

This summer, art historian Deborah Lubera Kawsky will deliver a lecture entitled “Inspired: The Art and Life of Artis Lane” on July 15 at Cranbrook Art Museum. Registration details will be available on the museum’s website in the coming months.