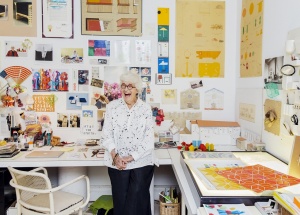 BLOOMFIELD HILLS, MICH., Nov. 4, 2019 - Cranbrook Academy of Art is pleased to announce that it will confer its 2019 Distinguished Alumni Award on Gere Kavanaugh (Design ‘52).

Kavanaugh will receive the award and host a conversation with Louise Sandhaus and Kat Catmur, co-authors of her new book a colorful life: gere kavanaugh, designer on Friday, November 15 at 6pm in deSalle Auditorium at Cranbrook Art Museum. Kavanaugh will also sign copies of the book.

Kavanaugh was one of the first women to earn an MFA from Cranbrook in 1952. After graduation, she went to work at General Motors where she was part of a design team coined the “Damsals of Design” by Harley Earl. She left General Motors to work in the Detroit offices of the shopping-mall pioneer Victor Gruen, who eventually sent her to the firm’s Los Angeles office and she has lived in California ever since.

In the 1960s, she struck out on her own and opened Gere Kavanaugh/Designs. There, she designed textiles, furniture, toys, graphics, homes, store and restaurant interiors, holiday decor, housewares, and public art—even designing and curating exhibitions. One of her greatest achievements was the design of the Research Center for the Nixon Presidential Library and Museum.

Over the course of her career, she influenced the design industry and the field of architectural color, and in 2016 she received the Ladislav Sutnar Prize in Pilsen, Czech Republic. The prize is awarded to outstanding practitioners and institutions in the design and art fields by The Ladislav Sutnar Faculty of Design and Art of the University of West Bohemia. She received the award due to her, “extensive and outstanding career in textiles, furniture, interiors, exhibitions, products, and graphics.”

Also in 2016, Kavanaugh received the AIGA Medal, recognizing her “prodigious and polymathic approach to design.” The AIGA award is the most prestigious award in the field, awarded to individuals in recognition of their exceptional achievements, services, or other contributions to the field of design and visual communication.

When asked, “What do you like to design best?” Kavanaugh has replied, “Anything I can get my hands on — just ask me.”

About her time at Cranbrook, Kavanaugh told Metropolis magazine, “The experience of Cranbrook is very simple. There are only 125 students now. There may be 150 at the most, but 125 live on the campus. You are required to go to every studio at least once a week to find out what the other students are doing. This is a way of getting an education by osmosis. I don’t know of another school like this in the country, not even the world.”

Her work is in the permanent collections of the Los Angeles County Museum of Art, the Pratt Institute, the Fashion Institute of Technology, The American Textile Museum and Brooks Memorial Art Gallery.

The conversation and award ceremony will be held in Cranbrook Art Museum’s deSalle Auditorium on Friday, November 15 at 6pm. Admission is free.