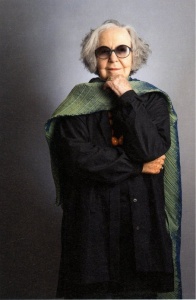 Bloomfield Hills, Mich., May 5, 2022 — Cranbrook Academy of Art and Cranbrook Art Museum, along with their Board of Governors, are pleased to announce that an honorary Master of Fine Arts degree will be conferred upon Olga de Amaral in absentia during the Academy’s May 13 Commencement ceremony.Amaral is a fiber artist, and one of the most recognized names in Latin American art. She studied at Cranbrook Academy of Art from 1954–1955, but did not earn a degree, which was common at the time as students often visited for short periods of residency. She met her husband, Jim Amaral, a prolific sculptor, at Cranbrook and the two went on to make a life for themselves by operating a design atelier along with their artistic practices in Amaral’s native Bogotá, Colombia.Cranbrook Art Museum recently organized the exhibition Olga de Amaral: To Weave a Rock with The Museum of Fine Arts Houston. It was on view at Cranbrook from October 30, 2021, through March 27, 2022, and is now available to tour virtually on the Cranbrook Art Museum website.Amaral was first introduced to the medium of fiber during her studies with Marianne Strengell during her time at Cranbrook Academy of Art. An “alchemist artist,” Amaral experimented radically with material, composition, and space – transforming flat woven tapestries into forms that defy the confines of any genre or medium.Amaral’s woven sculptures are the result of a lifetime of experimentation and material studies drawing on techniques like plaiting and wrapping, using materials as varied as horsehair and gold leaf. She has formed a unique visual language of abstraction that draws upon Colombia’s landscape and history as well as the artist’s own identity.Still practicing in her eighties, she is unable to travel to Cranbrook to accept the award but had this to say about the honor.“Thank you to Cranbrook Academy of Art for giving me an Honorary Master in Fine Arts Degree,” said Olga de Amaral.  “I am elated. Sixty-plus years ago, on the advice of a friend, I arrived at Cranbrook Academy of Art from Bogotá, Colombia. I arrived into a world of creativity and freedom and discovered my own creativity and my own freedom. This was unexpected, this was magic. Cranbrook was the turning point in my life, as an artist, and as a person. I met my husband Jim at Cranbrook. The honorary Master in Fine Arts Degree brings that turning point back to me. It reminds me of the excitement, the possibilities, the curiosity and the discovery, at, what I now understand was the beginning. Thank you.”In 2021, Amaral gifted the collection of Cranbrook Art Museum five Brumas (Mists), unique works of art that Amaral describes as “drawings in space.” They are geometric forms rendered through painting individual hanging threads that shift as the viewer moves around the work, changing perspectives that Amaral likened to her experience peering through the mists of the fog in Colombia.“Though she was trained in architectural drafting and design in Bogotá, she was introduced to weaving at Cranbrook,” says Laura Mott, Chief Curator of Cranbrook Art Museum and Co-Curator of the exhibition, Olga de Amaral: To Weave a Rock. “Her unique visual perspective has placed her work in dialogue with many other fields, such as painting, sculpture, installation art, and architecture, through her unique exploration of different forms and unconventional materials. She is a phenomenal artist who is finally getting the recognition she deserves. We are thrilled able to present her with this honorary Master of Fine Arts degree.”Amaral has been featured in many group and solo exhibitions internationally throughout the course of her career and is featured in numerous museum collections across the globe including Metropolitan Museum of Art, New York; Tate Modern, London; and Museo de Arte Moderno, Bogotá; among others. She has received many accolades for her artistic achievements including a Guggenheim Fellowship; Visionary Artist recognition by the Museum of Art & Design, New York; Honoree of the Multicultural Benefit Gala, Metropolitan Museum of Art, New York; and a Lifetime Achievement Award of the Women’s Caucus for Art, New York.“Olga was a trailblazer, among the first of many artists to study weaving at the Academy who would pioneer the use of fiber for artistic rather than strictly functional purposes, and who would continue that path forward by eventually freeing fiber from the loom itself,” said Andrew Blauvelt, Director of Cranbrook Art Museum and author of the book and accompanying exhibition, With Eyes Opened: Cranbrook Academy of Art Since 1932, which featured Amaral.This is only the third time in the Academy’s history that it has conferred an honorary degree, the first was to longtime supporter and former Academy and Art Museum Board Chair Maxine Frankel in 2015, and the second was presented last year to renowned sculptor and painter Artis Lane, who studied at the Academy in 1951.