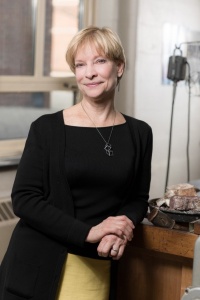 Bloomfield Hills, Mich., Jan. 24, 2019 – Dominic DiMarco, President of Cranbrook Educational Community, announced today that Susan R. Ewing has been named the Director of Cranbrook Academy of Art. Ewing had previously served in an interim role since August of 2018. An internationally recognized metalsmith, professor, and administrator, she brings decades of experience to Cranbrook.

“In the few months she has been here, Susan has made remarkable progress at the Academy,” said DiMarco. “She quickly earned the respect of the students, staff, faculty, and volunteer leadership, who have all been eager to work with her on planning for the future. We look forward to her upcoming initiatives and have full confidence in her guidance.”

Ewing comes to Cranbrook after serving as a professor and administrator for more than three decades at Miami University of Ohio. An accomplished metalsmith, Ewing joined the Miami University of Ohio faculty in 1981 and served as University Distinguished Professor for more than 10 years, and Senior Associate Dean/Associate Dean of the College of Creative Arts from 2008 until January of 2016. She was named a Distinguished Scholar of the Graduate Faculty (awarded 2005). In 1996, Ewing was awarded Miami University’s highest honor, the Benjamin Harrison Medallion.

“Moving into a more permanent role at the Academy of Art was an easy decision for me,” said Ewing. “This is an exceptional place with a distinctive legacy that is unmatched anywhere in the world. The passion for Cranbrook that has been demonstrated by our staff, faculty, students, and alumni and the synergy we share convinced me that this is the right place for me now and into the future. I look forward to our plans to preserve and advance Cranbrook as a preeminent school of art, architecture, and design.”

Over the course of her career, Ewing has collected a number of notable artistic awards. She received the Ohio Craft Museum’s Lifetime Achievement Award in 1995 and was twice honored at The White House (1993, 1994) by President and Mrs. Clinton as one of 80 artists included in the first White House Collection of American Craft. The collection was exhibited at the National Museum of American Art, Smithsonian Institution, Washington, D.C., and numerous other major venues.

Ewing has also taught internationally. From 1997 to 1999 she was appointed a J.W. Fulbright Senior Lecturing Scholar at the Academy of Art, Architecture, and Design in Prague; in 1999 she taught as a Masterclass Guest Professor in Silversmithing at the Royal College of Art in London.

Born and raised in Lawrenceville, Illinois, Ewing earned her MFA in Jewelry Design and Metalsmithing with Distinction from Indiana University, Bloomington.

Ewing’s artworks range from the miniature to the monumental and are included in numerous collections, from the Victoria and Albert Museum in London to the Alessi Museum in Crusinallo, Italy. She collaborated with the late Czech sculptor Vratislav Karel Novák on two major commissioned public art projects, Konvergence and the Crystalline Tower for Cincinnati, Ohio, and Table-Stůl, for the Middle of the Table exhibition in Solingen, Germany.