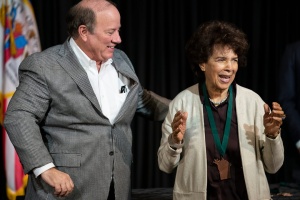 On April 12, Detroit arts figures were honored in the inaugural ACE Honors medal ceremony. Among the recipients is painter and sculptor, Artis Lane, who studied in the Academy’s Painting department and was awarded an honorary MFA in 2021. Lane is known for her figurative works including those of Rosa Parks, John F. Kennedy, Aretha Franklin, and many more. Lane’s portrait of Diahnne Carroll was recently accessioned into the permanent collection of Cranbrook Art Museum.

Shirley Woodson, who will deliver the 2022 Cranbrook Academy of Art Commencement address in May is also among the 16 recipients.

The ACE Honors medal ceremony is overseen by the City of Detroit’s Department of Arts, Culture and Entrepreneurship (ACE). It was devised by ACE Director Rochelle Riley as a way to celebrate artists and arts patrons who have contributed 25 or more years of exceptional service to the area.

Read more from the Michigan Chronicle

Read more from the City of Detroit