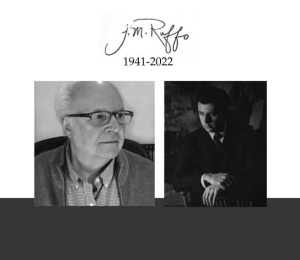 Cranbrook Academy of Art was saddened to learn of the passing of Joseph M. Ruffo (MFA Printmaking 1965). After graduating from the Academy, Ruffo’s professional career spanned 43 years at various colleges and universities across the Midwest and in Florida. At Univeristy of Nebraska-Lincoln (UNL), he was chairman and professor of art and director of the Eisentrager Howard Gallery for 19 years. At UNL, Joe was an accomplished administrator whose leadership contributed to faculty, student, and institutional success. He was named Professor Emeritus is 2003.

Joe was committed to bringing national attention to the art and art history programs. He steered the UNL faculty to join the National Association of Schools of Art & Design (NASAD), and later served on the board of directors of NASAD. In 2004 he received the Gladys Lux Art Education Award and in 2020, the Lincoln Arts Council Legacy of the Arts Award.

Ruffo’s studio work focused on painting and drawing on paper and designing and publishing limited edition books. His book awards include: The Chicago Book Clinic Exhibition Award of Honor for “A Book of Things” by Ted Kooser and “Quintent #3” by Randall Snyder. His graphic design work included 23 Cliff’s Notes covers. His work has been exhibited and included in public and private collections: the Detroit Institute of Arts; the Memphis Brooks Memorial Art Gallery; the Museum of Modern Art in Salvador, Bahia, Brazil; the Sheldon Memorial Art Gallery, Museum of Nebraska Art, The Mississippi Art Association, The Mint Museum, The Library of Congress, The University of Northern Iowa and The American Tool Company. His work is represented by Modern Arts Midwest gallery in Omaha.