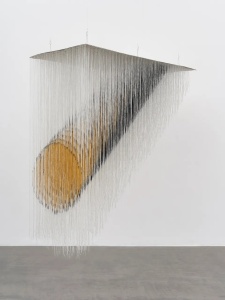 Vogue focuses on the history and oeuvre of influential Colombian textile artist, Olga de Amaral (Weaving 1954-55), in a new article marking the opening of a solo exhibition of her work in London at Lisson Gallery.

Olga de Amaral  focuses on seminal works from the last two decades including her iconic gold leaf and palladium tapestries, and dreamlike three-dimensional installations. Amaral is known for her use of materials such as horsehair, both inspired by her surroundings and a material with the strength to create “Woven Walls”, gold leaf inspired by travels in Japan where she was captivated by kintsugi—the art of reassembling broken pottery with gold, and plastics which became rooted in homes during the 1960s.

Amaral’s exploration and finesse of material paved the way for contemporary craft, where such variation is welcomed and respected.

Amaral credits her time at Cranbrook Academy of Art as forming the foundation of her lifetime career. She had already studied architectural drafting and design in Bogotá before pursuing a one-year weaving program under Marianne Strengell, head of Weaving at Cranbrook Academy of Art, where she worked on a loom for the first time.  While at Cranbrook, she also met her husband, Jim Amaral (MFA Design 1955), also a prolific artist and designer. When returning to Colombia, Amaral took with her a loom from the weaving studio, which traveled by boat, and is still present in her studio and known as the “Cranbrook loom.”

In 2021, Cranbrook Art Museum and The Museum of Fine Arts Houston partnered to co-curate a retrospective exhibition of Amaral’s work, Olga de Amaral: To Weave A Rock, accompanied by a catalog of the same title. The retrospective brought together works from 60 years of Amaral’s career, featuring tapestries and sculptures of several major bodies of work. You can view the exhibition in an interactive 3D tour on Cranbrook Art Museum’s website.

Cranbrook Academy of Art conferred an honorary MFA upon Olga de Amaral in absentia during the Academy’s May 13, 2022, Commencement ceremony.

Currently, you can see Amaral’s Adobe Gris, 1979, in a new exhibition on the newly-designated Collection Level at Cranbrook Art Museum. Constellations & Affinities: Selections from the Cranbrook Collection presents artwork from Academy artists reflecting the institution’s mission to encourage interdisciplinarity and creativity unbound by medium. Amaral’s work embodies an unrestricted impulse towards exploration. Throughout her career, she has continued to expand her material language and opened up an understanding of the unlimited potential of fiber.

Read the full article in Vogue

Thank you to Cranbrook Art Museum and Chief Curator, Laura Mott, for their research and writing on Olga de Amaral in With Eyes Opened: Cranbrook Academy of Art Since 1932,” a companion publication for a 2021 exhibition of the same title.